The Llariegu Pipe Band was created in 1996 by a group of people involved in several traditional schools from the central zone of Asturies, in order to spread asturian music and tradition throughout the world.

Since its early beginnings, the Band has been suffering a continuous evolution until reaching its current status. Nowadays it’s considered to be one of the best pipe bands from Asturies.

Llariegu officially begins its activity the 15th of August, 1996 in Faro (Uviéu). Initially composed by 15 members, it used C-tuned asturian bagpipes and traditional asturian drums. All songs were traditional compositions with a low grade of complexity.

In 1997 the Band begins to evolve both in the structural and the musical points of view. New members are incorporated after an exhaustive training and the drums are changed first to medium-tension snare drums and later on to high-Tension snare drums. Is in this year when the Band starts to play in relevant events like the Ascensión Pipeband Festival in Uviéu, Asturies, and the International Folk Festival from Corrópoli in Italy.

Although more than 40 musicians have been part of the band, the Llariegu Pipe Band is currently composed by 18 members.

The Band Director is Pablo Pérez, who is also teacher in the Aula de Música Tradicional Llariegu, and Arsenio Ruiz is currently leading the drums section and also teaching in said school.

Llariegu Pipe Band’s repertoire is composed not only by asturian traditional songs but also by own compositions and traditional tunes from Scotland, Ireland, Brittany, Galicia and the Basque Country. All the costumes are traditional from Asturies. 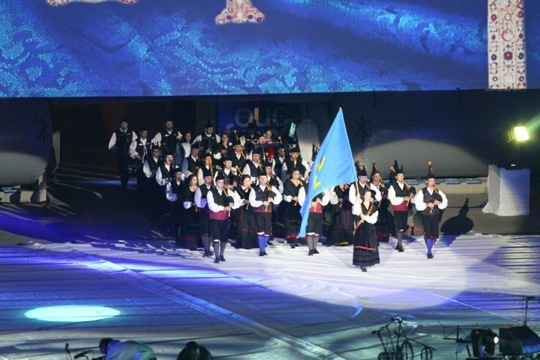 In 2003 the band stood second in the III National Asturian Pipe Band Championship and was awarded as Best Percussion Corps for the second consecutive year.

In 2010 de band was awarded with the Guinness International Percussion Award in the Festival Interceltique du Lorient, with the Banda Gaites Noega.

In december 2011, the band releases its first record “Llariegu 100% Live” in CD and DVD formats, recorded live the 27th of April, 2011 in the theater of La Laboral in Xixón.

The Aula de música tradicional Llariegu has been working since 1997 in Sariegu in order to preserve and spread the asturian musical heritage. Although the school works actively in different counties of Asturies such as Siero, Noreña and Uviéu, its HQ is in Vega, Sariegu.

The classes start in September and finish in July, with 11 months of activities and just a month of relax, August.

The instruments of the school belong to the pipeband, so students don’t need to own any type of instrument in order to assist to the classes.

Depending on the number of students, the following subjects are available:

For further information, please get in touch with the pipe band using its contact details.